some texts are also available in English

Another ‘Stadtzeichen’! … a giant is crossing the river Rhine in the city of Cologne. This figmentary ‘wanderer’ reflects the motion of urban structures which here connect the boroughs on both sides of the river, drawing attention to the metabolism of a city in overcoming natural obstacles. 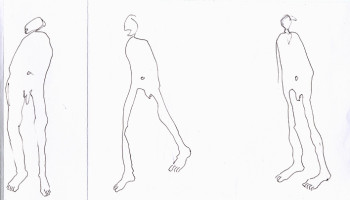 The crossing of a river, seen in a in a historical context, is often related to an expansion or shift of habitats. A drastic process that often shaped the fate of communities.
Today, it is a most common exercise, bereft of any archaic significance. The perception of our increasingly complex environment does not easily accomodate such notions in any case. It should be noted, that this trivialises our perception to some extent.
In this context, the archetypal drawing of the wanderer is, I suppose, a point of reminiscence.

Nowhere has man appropriated the world more than in the construct of a city. A city is by definition communal and thus also directly competing with the individual living within its confines and his subjective conceptions of life. The resulting and sometimes productive contradictions must be endured… amongst other things by questioning the apparently trivial and by determining the point at which ‘crossing boundaries’ is possible and resistance called for.

The new inhabitant of Cologne, like us, wanderer between the worlds.